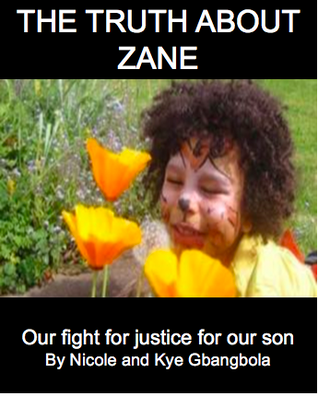 The first 2000 people to buy the book will receive a Limited Edition Hard back book with their name in it.  The cost is £20 for this book which will be produced once we hit the 2000 person target.  The proceeds will fund production of the Limited Edition and facilitate national and international mass production thereafter as buyers require.

Nicole and I would like to thank you for buying the limited edition book in advance and supporting our quest of Truth and Justice for Zane.

The book is bright and loving about Zane; a seven year old highly intelligent little boy, full of love and promise for a bright future ahead.  Zane’s life and the joy he brought will always shine brightly in our hearts.

The book contains lovely photos of Zane doing the things that brought him joy.  But this beautiful boy’s life is tragically cut short by a dark incident involving authorities that had forewarning of a danger to life.  If Zane and his family had been warned of this danger of migrating landfill gases, the toxic gases detected by Fire Services, in Zane’s home, the night he died, could have been prevented, and Zane would still be alive.

The Book tells the story of what was going on in the days before Zane died, and on the night it happened, then the facts that emerged which bring us to the present. The book charts the dark and light of events, and the people involved.  It charts issues such as secret landfill, cover up and collusion, who knew the truth, flawed inquests, and the quest for an Independent Panel Inquiry to return to Zane the human rights he was stripped of to deny him a proper, full and fearless investigation into his death, and the evidence of the nerve agent, hydrogen cyanide found to have infused Zane’s home the night he died.

What happened to this ordinary family could easily have happened to you.  Zane’s story affects and touches us all; it caused communities and individuals across the country to rise up against the burning social injustice surrounding Zane’s death.  It became apparent to many, the forces of unaccountable power within the authorities involved sought to ensure the truth must not be known by the public, indeed it is stated in black and white in the National Incident Log Book sent to the Government Emergency COBRA Meeting along with the ‘Very high levels’ of the deadly nerve agent Hydrogen Cyanide detected as present in the house.

When people die and Authorities lie, families are plunged into the depths of hell, this hell continues as authorities provide misinformation to stop the public joining the dots.  In addition the authority’s strength of arms offer them unlimited ability to vilify and discredit families, and victims, asking for truth.

We fight with a strength that can only come from Love; and the awesome power it provides.  If are the type of person that looks, rather than looks away from injustice, you will want to read this book about ‘The Most Toxic Cover Up of Them All’ ref Mail on Sunday.

This book is dedicated to the memory of our beautiful son, Zane Gbangbola, an angelic figure on earth who passed in God’s grace. A happy, happy boy who lived surrounded by love and exuded it back ten fold.
We were inundated with tributes when he died, many of them written in a lovely bound book and accompanied by hand drawn pictures of Zane and his friends, photos, poems and tributes.  Here are a few:

I liked playing football with you. You are a lovely boy. You are my first best friend. I miss you Zane more than anything. Dillon

I loved everything about Zane, but one thing in particular is when we were playing football and he scored. Alex

I enjoyed hearing you laugh. I loved him. Lucia

I liked it when you sat next to me and when you smiled at me.  I miss you Zane. Lucy

I remember playing football with Zane, it always made me happy because he was my friend. Charlie

I remember Zane, he was a really kind and loving boy. Sinead

IMPORTANT: You do not need a PayPal account to pay with your Visa, Mastercard, American Express or Direct Debit.
Copyright © 2014 - 2022 Nicole Lawler. All Rights Reserved' on the site.